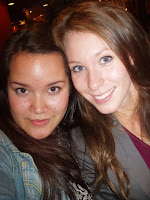 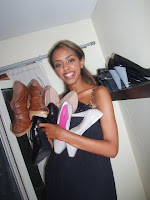 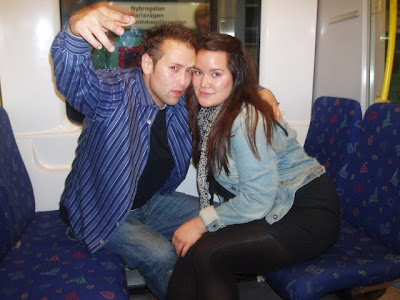 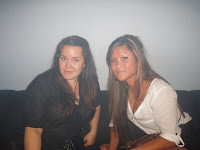 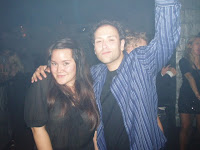 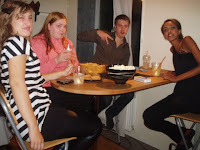 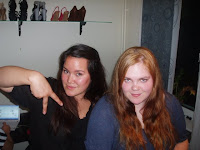 Saturday, Moving in party at Jordanos' new pad in Stockholm, it's a fairly decent size one room apartment, I drank just a tiny bit, we played some drinking games, snacked on chips, cookies and popcorn, around midnight we started moving, plans were to go to the club called BLÅ, Oh and BLÅ with an upside down Å, which I thought was the stupidest thing I've ever thing, Way to go on being different guys...Not.
Anyway, when going down the very steep escalater to the subway, Emil decides to slide down on it, unfortunatly, it didn't go very well AT ALL, and he fell badly and sprained his ankle. Poor guy! but what the hell, why did you do it?! you crazy animal! :P We all do crazy things sometimes when we've had a glas too much. I hope he gets better soon tho, I feel bad for him, injuries SUCKS!
Emil and Elin went back to Jordi's apartment and we others continued the night, went to BLÅ (with an upside down Å.) dances until they closed, it was an alright place, good music, just a lot of kids, but the beer was 25:- AWESOME STUFF. After that...
We took the tube down to Hötorget and meet up with my BFF - Best friend forever Maria! had some McDonalds, I went out of line and had 2 cheeseburgers AND a chicken jr. It was so nice to see Maria, even if it was for a short time, we said goodbye, I miss her already, we went back home with the tube, walked from the tube, and I actualy survived all night with my high heels. HIGH FIVE, walked over a cow field, and up a hill...seriosuly, survivior of the night ;) but I was soooo f***** tired when I got back to Jordi's place and I felt sick from the McDonalds hamburgers, almost wanted to throw up!!??
Anyway, I got to sit down for like a micro second and then a friend of Jordi's that was gonna go with us back home to Uppsala, wanted to go right away, she offered to drive and I thought suuuure ok, but...I kind of wanted to chill out a couple of more min. but whatever.
Came home 7 am and I passed out! and now my sleeping sceduale is all messed up.
Tomorrow is a BIG DAY, we're have the big test for going up as trainees at my work. I hope it goes well. :) I've been studying as much as I can.
Just really hope it goes well.