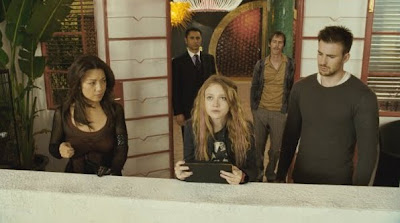 It's been a long and slow day.
Been working morning/day shift. Been slow and tired as hell, but I'm good tho, cause now I have 3 days off work in a row. Yay!
After work I went to my dad's new pad. He's finaly moved into the house that he's been waiting to live at since the dirvorce this summer. It's nice...but old, and he's has lots of renovating plans for it already.

Stayed there all night, (to my suprise) had some dinner, watched a movie called Push, it was alright, got a little lost in it but it's about people that has powers, AND AGAIN, after the movie....hrrm...I wish I also had powers. *rolleyes* To be able to push things would be cool, not to see the future tho, cause that's a little creepy and I wouldn't wanna know what's gonna happend next all the time OR worse...how I'm gonna die. To be able to track things would also be cool, when touching an item you could track where it comes from and get to know it's history.

Tomorrow I'm gonna meet up with Elin and her BF Jimmy and check out some sort of "Autum-flee-market" I'm excited. Hope the weather's nice tomorrow, Sunny but chilly at the same time, that would be soooooooooooooooooooooooo nice!!... No to rain and clouds.