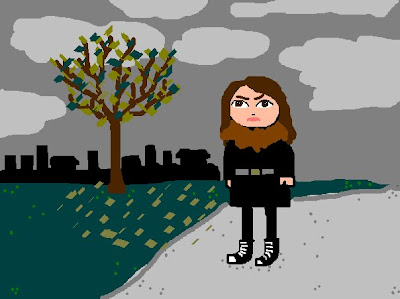 I've already wasted it away by sleeping til 3.30 pm. I had this wierd world war 2 dream, it was insane, this woman was in charge of...something...and she gathered up people on a townsquare to announce something, then! artillery from the air shot them all down...ambushed. And people were bleeding and chaos broke loose. And she killed everybody that went against her, and she was having affairs with two different guys...she was crazy, and she had a dresser in her room that had letters sticking out of it saying, "Handpick people by their feet". WHERE do I get these dreams from? what's on my mind I question myself? am i sick?!
Anyway...I had to keep dreaming the dream thru...so I ended up sleeping until 3.30 pm, talk about sleeping away the whole day, but I did get home a 6 am this morning from my night shift so, I've at least gotten about 8-9 hours of sleep.

Now, I have to go to work again, and the weather sucks, I don't like the clowdy and grey weather, it's chilly and I have to start wearing my winter jacket, what's up with that?! it's October?! and I feel that I'm getting a cold as well...I sneeze all the time. Anyway. gotta run! :)
I'm gonna try to have an enjoyable Saturday, even tho it's a sucky day outside.