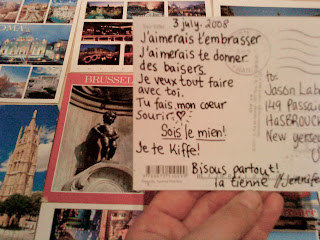 I spelled New Jersey with a Y and not a J, Jason thought it was adorable, New Yersey. God, how embarrassing. 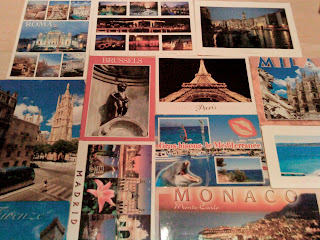 Been doing some serious clean up and packing today. Found these postcards, postcards that Jason brought with him from home (US) it's the postcards I sent him last summer when I was backpacking around Europe. I had the time of my life...
I want to go backpacking again!!
It's amazing, life changing, it's an experience you'll never forget. The summer I was gonna travel I had just started talking to Jason online, and we'd just kind of "fallen in-love" with each other over the internet, the thought of not speaking to him everyday for a month like I always did made me nervous, would we lose contact? Well...we're together today so no, but it was tough, got a phone bill for 5000 SEK. ;)
Sent Jason postcards at every city i visited, I think one or two never made it to him, visited Paris, Madrid, Amsterdam, Venice, Brussels, Milan and more. He of course saved the postcards and brought them with him when he moved to Sweden, I want to do something with these postcards, frame them all together maybe? Does someone have another good idea? I just don't want to have them lying around, they mean a lot to me and Jay.

Shortly after I came back from my trip me and Jason meet for the first time, he came to Sweden to see me, shit, I don't think about it often, but damn...he's such a great guy! He came all the way from the states to SWEDEN!? to meet me...
I felt/feel like the luckiest girl on earth.

Anonymous said…
Sorry, read your little conversation with your friend in the comment section :p AND I could help you with your French and you'd help with Swedish haha :D DEAL?
How did you find Brussels btw? And OMG I was just wondering how would I know if you ever answered all my comments... And I've just figured out there's a "Suscribe by email" button. Hope this is the right one. Okay well it disappear whenever I comment with my Wordpress login. CRAP.
December 6, 2010 at 2:36 PM